Thought of soccer as a career? You’re not alone. Of course, we know that not everyone makes it, but the crème de la crème have quite a story to tell (and great selfies to post). US Women’s Soccer is no exception. Rife with both homegrown and/or acquired talent, they have been coached effectively—with visible results. In the wake of all that success, soccer has become an ambition for U.S. women—like Elli Reed.

With lots of experience under her belt, Elli’s in her 5th season with Seattle Reign. She’s one of those who made it. But it’s not just her winning smile or expertise that makes her stand out—Elli uses her platform to share the dream. She speaks out for ZGiRLS, which encourages girls in sports to be confident and courageous, and she’s heading to a remote Peruvian village with Crooked Trails (an immersive travel program) to build a pitch and conduct soccer clinics. Enough said…let me introduce you to Elli Reed:[Emphasis placed by the editor]

I’ve always been extremely passionate about soccer and have had a burning desire to be the best I can be. This dedication (or obsession) of mine simply led me to the next steps of my career: from high school and club to college, to playing professionally. I always dreamed of playing soccer at the highest level and was so grateful and excited that there was a league in the United States for me to go into after college. I honestly never really thought of doing anything else other than playing soccer and it felt very natural to me to make a career out of it.

I would tell them that being confident and maintaining your self-belief is extremely important. Your career is going to have highs and lows and you need to be mentally strong to get through it all. One way to do this is to focus on what you can control—like your work ethic, keeping a positive attitude and always believing in yourself.

I have always been a natural athlete and my love for soccer sparked early. But yes, I worked very hard and always pushed myself to be better. I was always doing extra [drills] at home with my dad and brother, and if I didn’t play well in a game or at practice, I would storm home in a fit and work on whatever I thought I was bad at.

Yes, I do think that competing in Track & Field helped me in soccer. First of all, it taught me the importance of being in good shape. Track is a very individual sport. I would get very nervous before races, so I believe it helped me learn how to handle my nerves and prepare mentally for events. Also, I believe participating in other sports and activities growing up helped shape me into an overall better and multi-dimensional athlete.

The best part about my job is that I get to do what I love every day with some of my best friends. Soccer has taken me around the world and I have met some pretty incredible people who I will be friends with for the rest of my life. Not to mention, being a professional athlete allows me to get my competitiveness out of my system and enables me to live a healthy, active lifestyle.

Yes, being a professional female soccer player has some drawbacks. For example, the lifestyle can be tough. I pretty much move every six months, so I never feel truly settled in—I know I’ll be packing up everything I own and moving soon. Also, our league does not run year round.  That makes for a long offseason with no pay and leaving us to our own means of training.

We were very excited going into the finals of the 2008 U-20 FIFA World Cup. It was a dream come true! Those kinds of games are a once-in-a-lifetime opportunity and I was honored to step onto the field with my teammates.

Yes, from what I saw, the North Korean team was much like other teams. We simply saw them as our competition on that day. They were a very solid team that had a lot of talented players and winning that game was no easy feat. They were gracious after the game and I enjoyed sharing the field with them that day.

A lot of the girls on the team had family that had traveled to Chile to watch the final game, so the team and all of our loved ones celebrated together. It was a very special group of players, coaches, and staff members, and the fact that my family was there to experience it all with me was unforgettable. I’ll never forget my time with that U-20 team, and I owe a lot of my success to Tony DiCicco for believing in me and developing me into the player that I am today. [Editor’s note: Tony DiCicco played soccer for the Rhode Island Oceaneers; was a commentator/analyst for ESPN and Fox Sports and coached the women’s national and U-20 soccer team in two FIFA World Cup championships. He died of cancer on June 19, 2017, at 68.]

At home and abroad

I truly enjoyed my time playing overseas and it absolutely helped my game. Every country has its own style, and being able to learn and grow from those experiences helped me mature as a player. When I played in Germany, everything was in German and I took German language classes. It was definitely tough at the beginning, but my teammates were helpful and I eventually caught on. By the time I left, I could pretty much understand an entire practice! In Sweden, a lot of the players and staff spoke English very well and would happily translate things for me.

My time with the Reign has been great. The club has provided a very professional environment for me to grow as a player and I’ve gotten to train with some of the best players in the world. I am in my 5th season with the Reign and have been with the club since its first year—I think that is pretty special. I have helped the club grow over the past five seasons, and am very dedicated to my teammates and the team as a whole.

That is a tough question! Although I do enjoy coaching, I do not see myself coaching in the future. I hope that I have a job that allows me to help others, give back and travel. I can definitely see myself living in the Pacific Northwest and having a family—and a dog, or two!

Yes, Z Girls is an amazing organization and the positive impact it can have on a young girl’s life is huge. If I hadn’t found soccer when I was younger, I honestly think that I would have found another sport to dedicate my life to. I have always been super competitive and sports were huge for me growing up. As previously mentioned, I ran track and field, but I was also involved in cross country running and downhill ski racing.

My mom is in the travel industry and she knew someone that used to work with Crooked trails. I reached out to Chris, the Crooked Trails co-founder, and our interests just aligned. Chris had been wanting to do something with soccer for some time, and Lu [Lauren Barnes] and I love to travel and to give back—and that’s how this trip came about!

Yes, I am really looking forward to putting on some clinics while we are in Peru. I think it will be open to anyone who is interested, although I am not entirely sure on Peru’s involvement in girl’s soccer. However, I hope that I can make some sort of a positive impact while I am there. I want to inspire young females to get into the sport and believe in themselves!

I do believe we will be traveling with individuals who speak Spanish. I took about five years of Spanish in school so I have a good base of the language; however, I haven’t spoken or studied it in quite some time.

Just to be confident, believe in yourself and work hard. 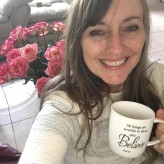