The curious treatment of Angel Gomes

When Angel Gomes was handed his Premier League debut as a 16-year-old in 2016 it was widely accepted he would go on to become one of England’s best creative midfielders.

After captaining England and Manchester United at youth level it seemed he was destined for greatness at Old Trafford.

In the seasons that followed his senior debut though Gomes has only managed a handful of first-team appearances.

With Ole Gunnar Solskjaer being permanently appointed as United manager in March of last year, many believed the 2019-20 campaign would be a breakout season for Gomes, given the Norwegian’s faith in the club’s youth system.

And when the 19-year-old impressed on United’s pre-season tour it seemed inconceivable that the London-born playmaker would be restricted to a peripheral role once again this term.

But come the end of January and Gomes was omitted completely from United’s squad for the 6-0 win over Tranmere Rovers in the FA Cup, with his future at the club looking ever-bleaker.

While another academy graduate in Mason Greenwood has forced his way into Solskjaer’s plans with his persistent goal-scoring form, it appears Gomes has failed to impress his manager in the brief spells he’s spent on the pitch this season.

An alternative theory for Gomes’ lack of playing time is his failure to sign a long-term contract with the club – unlike Greenwood who penned a four-year deal in October 2019.

With just six months remaining on his current deal, he is free to negotiate with other clubs over a potential summer move.

Perhaps Solskjaer is hesitant to use a player that might not be at the club beyond this season?

The issue with that theory though is Solskjaer’s treatment of another United youngster, Taith Chong, who is in a remarkably similar situation.

Like Gomes, Chong was expected to break into the first team this season after regularly impressing at youth level, but he too is yet to sign a long-term deal.

Unlike Gomes though, Chong was brought on at half-time in the cup game against Tranmere as he gained valuable experience in the men’s game.

The Dutchman hasn’t featured as regularly as Greenwood this season, but the cup tie against lower-league opposition was deemed a suitable occasion for more minutes.

If Solskjaer is freezing Gomes out due to his contract negotiations, then why wouldn’t Chong be frozen out too?

United have been desperate for creativity from midfield this season which Gomes has proven he can provide at youth level, but still they persist with the uninspiring Jesse Lingard or Andreas Pereira in the number ten position.

With the likes of Lingard in such dismal form, it’s hard to see how Gomes could perform any worse if he was given a chance.

It is a curious situation with very few able to decipher Solskjaer’s true thoughts on the diminutive Englishman.

If Gomes is, in fact, leaving why would he be included in any matchday squads?

The midfielder has played in Europa League games and has often been an unused substitute in league fixtures, which seems a pointless exercise for a young player if he is set to leave – there is no benefit to United of him being in matchday squads.

But if he is staying at the club and Solskjaer doesn’t think he is good enough yet, then surely a loan move to Championship club would make sense?

Gomes would massively benefit from regular first-team football, and if he isn’t going to get that at United a temporary move elsewhere would satisfy those needs.

With the cousin of former United winger Nani seemingly stuck in limbo, it wouldn’t be surprising if the outcome is, in fact, him leaving the club.

If he isn’t going to be sent out on loan and isn’t going to play in FA Cup games against League One opposition, then he has been given very little reason to sign a new contract.

Either way, it would take a remarkable show of patience if Gomes were to commit to further years of watching on from the stands – especially as his former teammates at England youth level thrive elsewhere.

Chelsea’s Mason Mount, Manchester City’s Phil Foden and Arsenal’s Bukayo Saka have all thrived in the Premier League this season after progressing through their respective youth systems and highlighted what Gomes could’ve done for United this term – and what he might do elsewhere in the near future. 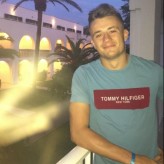