Is Jesse Lingard among the best attacking midfielders in the PL?

The story of Jesse Lingard—that of a Warrington-born boyhood Manchester United fan going from being the perennial scapegoat that symbolised United’s seeming mediocrity to the match-winning hero that the supporters did not quite deserve—is a remarkable one. What the now 24-year old has experienced in the last few weeks is an occupational evolution—paraphrasing United head man Jose Mourinho’s words. Though for those humans who may not have yet had a Pokemon experience in their lives that may sound a bit weird, yet it cannot be any more apparent that Lingard has certainly had one and the stone has indeed worked its wonders.

Lingard by the numbers

In the not-too-distant past, to even mention Lingard in a list that contains the traditional ‘playmakers’ such as Kevin De Bruyne, Eden Hazard, Mesut Ozil and former Liverpool playmaker Phillipe Coutinho was a crime that you did not want to commit. But such has been his form of late that I am compelled to look at the numbers (as of 7 January 2018) and evaluate his effectiveness and thereby impact he has had in Manchester United winning games of football. 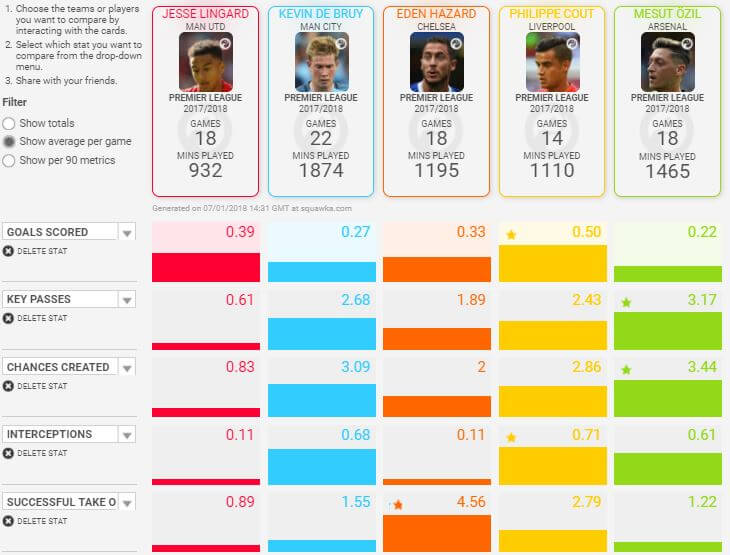 What we see in the above graphic does in a way illustrate why Jesse Lingard may never be universally appreciated nor understood—for want of a better word—for all he brings to the pitch.

Besides the number of goals scored, Lingard is not quite comparable with the rest in any other metric. He does not create as many chances as the others, neither does he get to orchestrate the build-up as much as the others do for their respective sides. For all the efficiency he has shown in front of goal—scoring 8 in 10 appearances (9 starts to 7 January) in all competitions, averaging roughly a goal in every 3 attempts in the process, Lingard does not offer much else. Or at least, that has always been the general consensus.

What Lingard is not

Jesse Lingard is also not very compelling to watch. He does not make players around him do better in the way that truly world-class players do. But he is, unlike any other in that Manchester United squad, both flexible and adaptable enough to mould himself to suit a style of play and to contribute to the system so as to validate it and perhaps even enhance it as well.

Often deployed in the right or left where he could influence the game by creating space for the centre-forward to run into—in addition to releasing the main goalscorer himself—Lingard’s direct say on the game has usually been limited, except in the cup finals at Wembley, of course.

Yet whenever he was featured, he was integral to the way the team functioned. This has been especially true under Mourinho as United has morphed into a counter-attacking team that did not need or even want more time on the ball. It is interesting to note that United’s average possession stands at just 51% for 2017/18 so far; quite a slide from 55% in the last two seasons and 57% in the campaign before.

Lingard’s most important number is 10

What Lingard is, however, really good at, is running with the football and knowing when to take a gamble. And that is hard to coach. For all the flak he gets, the 24-year old never hides from taking responsibility for his proactive play. It cannot be coincidence that a lion’s share of his goals would not be out-of-place in a carefully curated highlights reel. Likewise, understanding the way Lingard operates is essential to appreciate what he does. 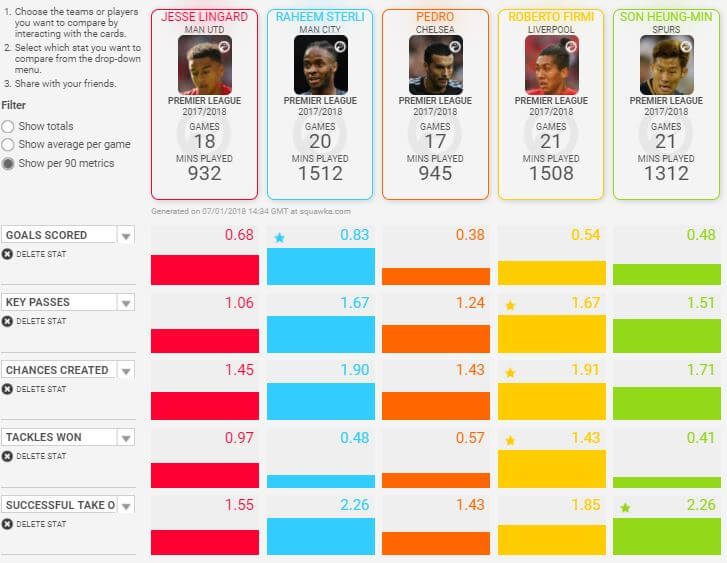 Unlike the previous graphic, this is one where Lingard does not seem out of place at all. Like Raheem Sterling of Manchester City or a more experienced Pedro at Chelsea, Lingard’s skill set is different to what used to be the norm for central attacking midfielders, hence the hesitation. Lingard, like others in this group, is the modern number ten with an abundance of persistence and purpose and, as a group, their accomplishments reveal that persistence is a talent too.

It would seem that Mourinho has come to appreciate Lingard’s gift in this regard. Just as Sir Alex Ferguson did, long before the Portuguese, when Sir Alex saw the youngster’s potential his formative years.

It’s high time the rest of United’s supporters appreciated him too.